Woodbridge, VA rap artist PHZ-Sicks (pronounced ‘physics’) presents the John Ledbetter-directed music video for “Black Women”, the Best Kept Secret-produced song from The Moment, his new album featuring Detroit rapper/singer Scolla, singer Alison Carney, DMV rapper Lyriciss and fellow Triple S crew member Seanny Greggs as well as production from Stompboxx Music, Epik the Dawn, Kriss Liss and Kajmir Royale. PHZ was a 2011 DMV Best VA Male Rap Artist nominee, has opened for Wale and J. Cole, and 2DopeBoyz gave The Moment honorable mention for best mixtapes in 2013. “In this video, I wanted to capture the beauty, power, and love that’s embodied in black women,” says PHZ-Sicks. “For that I opted to not be in the video and let the camera capture the message of the song as well as the genuine beauty inside and out for women of color.” Click here to watch a video documenting the making of The Moment, and visit PHZ-Sick’s Bandcamp page to purchase a personally signed and messaged CD copy.

video: YA BOY HARDHEADED, “ODD MAN OUT” produced by Pro Prospek | directed by Focus Cinema TV from the album 7000&1 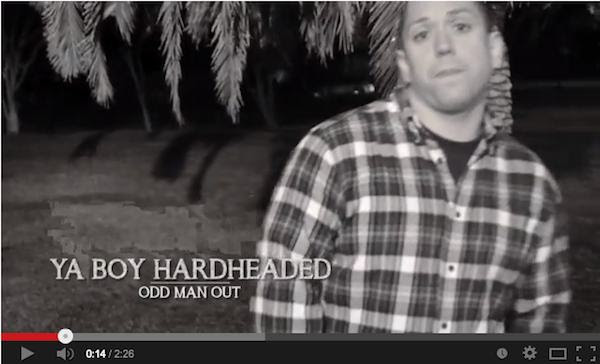 New Orleans rapper Ya Boy Hardheaded presents the Focus Cinema-directed music video for “Odd Man Out”, a song from his album 7000&1.  “Odd Man Out” is produced by Pro Prospek, who won Producer Of The Year at the 2010 New Orleans Underground HipHop Awards. “I have been constantly criticized by people in my life for my interest and love for hip hop,” says Hardheaded. “I got the name Hardheaded from my family because I like to do things my way. I slapped ‘ya boy’ on there because that’s what I tell people when I’m snapping on them, like “look at ya boy… he looks like ya uncle” or whatever. Being a hardheaded person and loving hiphop and feeling like I really never fit into what people thought I should be or wanted me to be, I always called myself the Odd Man Out and instead of being pissed off just I accepted it and kept doing what I liked to do.”

Richmond, VA rapper Dr. Millionaire presents the Joseph Pleasants-directed music video for “Alt Bitcs”, his Hovey Benjamin-produced new single. “‘Alt Bitcs’ is inspired by all tha cute art school babes living in Richmond,” explains Dr. Millionaire. “The song describes selling weed and sipping lean and killing shows. References to artists I heard about on Pitchfork. An affinity for beautiful alternative women. Art school girls with pink hair and tattoos. Hypebeast chicks that rock Palace and Hood By Air. College girls that shop at Rumors Boutique and upscale hipsters that shop at Need Supply Co. All of them riding their fixies through the city. I have two mixtapes, an EP and a few more videos ready to go in 2014. My plan is to keep writing songs and meet as many gorgeous alt bitcs as possible.”

Irangeles (Iran/Los Angeles) lyricist Malkovich presents the Hashim Thomas-directed music video for “Through The Trees”, from his new album Great Expectations, written and recorded in New York City, New Orleans, Atlanta and Los Angeles after Malkovich gave up his home and possessions to travel indefinitely. “Trees” is produced by L.A. beatsmith Computer Jay, whose Savage Planet Discotheque EP features Gaslamp Killer. “Trees” also features a verse from Sum, whose Dragon album features Ski Beatz, and Chris Clarke, whose The Handpicked full-length features Thundercat, Blu and Sleepy Brown. BLVME and Ali Abnormal also contribute verses. Expectations is the followup to his Ayatollah Presley mixtape hosted by deejay/producer House Shoes (watch the video to the Dibia$e-produced “WTF”), and videos to three Expectations tracks – “Lies” (watch), “What I Know” (watch) and “Palms” (watch) have already been released. “[Malkovich] is owning everyone in the current scene, and you better believe it,” says HitTheFloor Magazine. DJ Premier played the Great Expectations cut “Bedbugs” on the January 18 edition of his Live From Headqcourterz mixshow (listen). Great Expectations is available as a free download for a limited time.

A few weeks back Childish Gambino dropped an interesting trailer for his short film “Clapping For The Wrong Reasons,” and now he unleashes the 24-minute director’s cut for all to enjoy. The feature includes Chance The Rapper, Abella Anderson, Flying Lotus, Trinidad Jame$ and more, the film looks to give viewers a glimpse at a typical day in Gambino’s life. We get to check out previews of tracks throughout the clip, as well as acapella freestyles, with only time of course in between when the full songs will surface. Press play up above and let us know what you think.

Childish Gambino has also completed renovations on his new site featuring everything from behind the scenes footage to instrumental audio snippets to random YouTube videos to GPOY photos to text message conversations. Check out the link below.

Today we get to see Big Sean liberate the anticipated visual for “Beware” featuring Jhené Aiko and Lil Wayne. The triple punch track is to be featured on the G.O.O.D. Music rapper’s upcoming sophomore album Hall of Fame. The colorful clip highlights each artist throughout, with some impressively creative graphics. Hall of Fame lands on August 27, enjoy now by pressing play above.